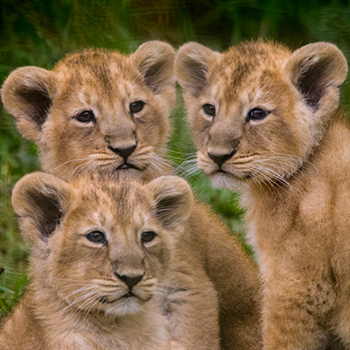 The Park’s pair of rare Asiatic Lions, Rana and Ranha, have made history with their very first litter. Their cubs are the first Lion triplets to be born at Cotswold Wildlife Park since it opened in 1970.

The new parents are both five years old. Rana arrived at the Park on Valentine’s Day 2013 from a zoological collection in France.  Ranha joined him one year later from Parken Zoo in Sweden. Both came to the collection as part of the European Breeding Programme (EEP) and keepers hoped that they would one day produce a litter of their own. The two formed an instant bond and two years later, after a gestation period of four months, Ranha gave birth to three cubs – Kali, Sita and Sonika. 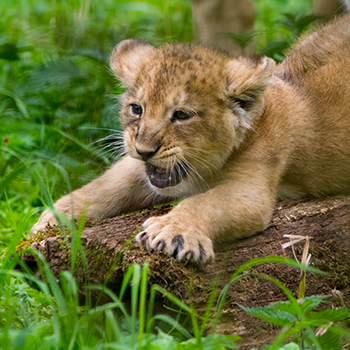 Lionesses rear their babies in seclusion and often reject them if they are disturbed so keepers watched the births remotely on CCTV monitors. For nearly two months, the triplets lived solely with their mother in the birthing pen. Rana remained in the neighbouring enclosure but was never too far from the cubs, often seen by keepers taking a great interest in his new family. This week, the cubs were successfully introduced to their father in the main Lion outdoor enclosure. Ranha and Rana are proving to be exceptional first-time parents and all three boisterous newborns, sexed as female, are healthy and developing into confident young cubs. 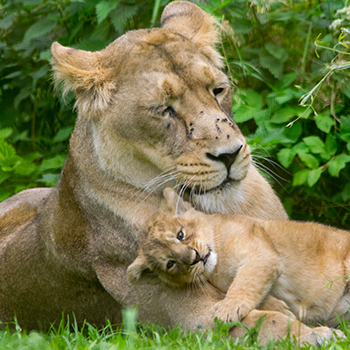 Curator of Cotswold Wildlife Park, Jamie Craig, commented: “We have not bred Lions for many years at Cotswold Wildlife Park so it is an exciting time for the mammal keepers. Our young pair are proving to be exemplary parents and although there was some trepidation when we reintroduced the Lioness and her cubs to the male, all went without a hitch and they can now be seen playing happily families in their enclosure.”

Asiatic Lions (Panthera leo persica) are one of the world’s rarest big cat species. Wild population numbers have declined drastically over the last century, almost to the point of extinction. Once found throughout much of South-West Asia, they are now only found in one isolated area – India’s Gir Forest. This region is the sole home to this subspecies and is considered to be one of the most important conservation areas in Asia. In 1900, the Gir was declared “protected” by the ruling Nawab of Junagadh, Sir Muhammad Mahabat Khanji III. He pioneered conservation efforts which saved the world’s last Asiatic Lions from almost certain extinction when population numbers plummeted to critical levels – as low as 200 individuals left in the wild. Trophy hunting, subsequently banned by the Nawab of Junagadh, was rife. Habitat destruction also devastated populations. In 2000, the forest was estimated to cover approximately 2,600 km2. Since then, it has shrunk to less than half its size. Most of the remaining forest has since been included in the Gir National Park and Wildlife Sanctuary*, yet the Asiatic Lion is still considered to be vulnerable to extinction from unpredictable events, such as an epidemic or large forest fire. An epidemic in Serengeti National Park in Tanzania in 1994 killed over 1,000 Lions in a few weeks and conservationists remain concerned a similar event could wipe out wild Asiatic Lion populations. They are classified as endangered by the International Union for Conservation of Nature (IUCN).