Cotswold Wildlife Park is celebrating the birth of a litter of five Eurasian Wolf cubs – the first to be born at the Park in its forty-seven year history.  First-time parents Ash and Ember and their playful cubs can be seen in their woodland enclosure behind the Flamingo and Pelican Lake. 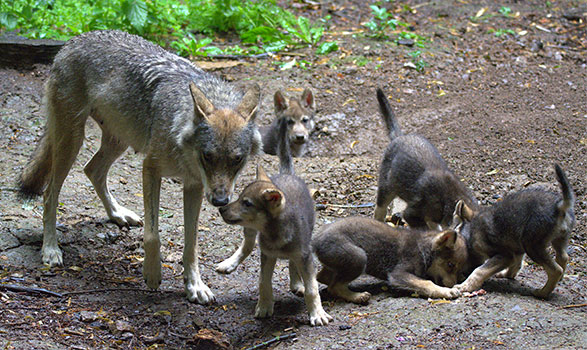 Two-year old Ash and three-year old Ember are recent arrivals at Cotswold Wildlife Park. Both were born in Sweden and arrived from different collections in October 2016 as part of a breeding programme. The Park’s mammal keepers weren’t expecting a breeding success quite so soon as Wolves can take a long time to bond and females only come into season once a year (between January and March). The births were an unexpected but welcome addition to the collection. 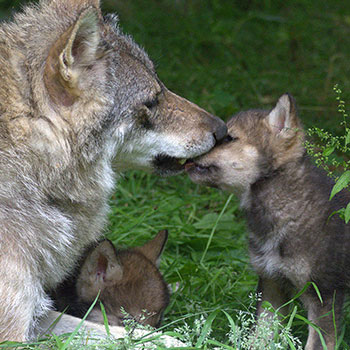 For the first ten days, the cubs were hidden from sight inside one of the underground dens the parents had excavated. One night, after a heavy downpour of rain, Ember had taken her cubs out of the birthing den and placed them above ground for safe keeping. This was the first time anyone had seen the cubs. Both Ember and Ash are devoted first-time parents and keepers are delighted that the youngsters are healthy.

Curator of Cotswold Wildlife Park, Jamie Craig, commented: “Our Wolves are a new pairing and we did not really expect a successful breeding so soon. They have settled well and at present, everything with the adults and cubs is going to plan – we are keeping our fingers crossed that it continues but we have more confidence with every day that passes. The cubs will form an important nucleus to the “pack” for the coming years.”

Wolves generally pair for life. Mating takes place in late winter or early spring. After a gestation period of approximately sixty-two days, the alpha female gives birth to a litter (usually between four and six cubs). At birth, the cubs are born blind and deaf and are reliant on their parents for survival. After eleven to fifteen days, their eyes open. Cubs develop rapidly under the watchful eye of their mother. At five weeks, the cubs are beginning to wean off their mother’s milk but cannot immediately fend for themselves and require considerable parental care and nourishment.

The Wolf was once the most widely distributed land mammal on the planet, except for humans. They were more or less eradicated in England by the 13th century. Wolves were destroyed in great numbers to protect the most important asset at that time – livestock (to which they were a constant threat). The persecution of Wolves started early. The Celts hunted Wolves in the third and fourth centuries B.C with the help of specially trained Irish Wolf Hounds. Later, Edgar the Peaceful created amnesty laws related to the Wolf: lawbreakers could pay their dues in Wolf heads. In 1560, King James VI declared that all men – no matter how old or young – participate in the hunt for Wolves. The probable date the Wolf became extinct in England was 1684. In central Europe, the battle against the Wolf took on a less frantic pace but in the first decade of the 20th Century, forty-eight states in Europe were already cleared of Wolves. 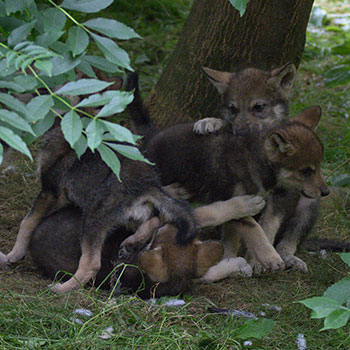 There are many examples where other cultures view Wolves in a far more positive light. In Palaeolithic times, primitive hunters thought that certain animals, including Wolves, were supernatural and believed these “guardian spirits” would protect them. Inuit honoured the Wolf above all other animals and according to the Mongolians’ myth of origins, Genghis Khan’s first ancestors were Grey Wolves sent from heaven. Today, his descendants are members of the Borjigid clan, which means “wolfmaster”. The Wolf was also a major figure in the lives of the Romans, including the well-known legend of the founding of Rome by the twins Romulus and Remus (who were saved by a she-wolf who found and nursed them). The life-sized bronze sculpture of the she-wolf suckling the twins remains one of the most important works on display at the Capitoline museum and was used as the emblem of the 1960 Rome Olympics.

After centuries of persecution, population numbers are now recovering across many areas of Europe due to favourable legislation, although some small populations remain critically endangered. Large carnivores are among the most challenging group of species to reintegrate back into the European landscape. Thanks to dedicated conservation efforts, a small population of Eurasian Wolves has returned to the Alps and according to latest estimates, in Central European Lowlands, thirty-six packs and five pairs have been recorded. Their original worldwide range has been reduced by about one-third by deliberate persecution due to depredation on livestock and fear of attacks on humans. Eurasian Wolves are still hunted in many countries, but are increasingly protected by local laws.

The newborns will be named once their sexes have been determined. Names will be announced on www.facebook.com/cotswoldwildlifepark and @CotsWildTweets.