The mating game is always an unknown entity in nature. Some animals bond immediately but others show absolutely no interest in a potential partner. When it comes to animal introductions at the Park, despite the best efforts from keepers to create the perfect environment, there are no guarantees. It’s the animal equivalent of a blind date. Thankfully, in the case of a rather prickly introduction between two Porcupines, things couldn’t have gone smoother. All expectations were exceeded when two-year-old Hannah arrived from the Czech Republic last September and was paired with the Park’s breeding male – a Cape Porcupine called Prickle. Keeper Estelle Morgan commented: “As soon as Hannah was introduced into the enclosure, they immediately began grooming each other and establishing their monogamous pair-bond. They were sleeping side by side from day one and were seen mating not long after”. 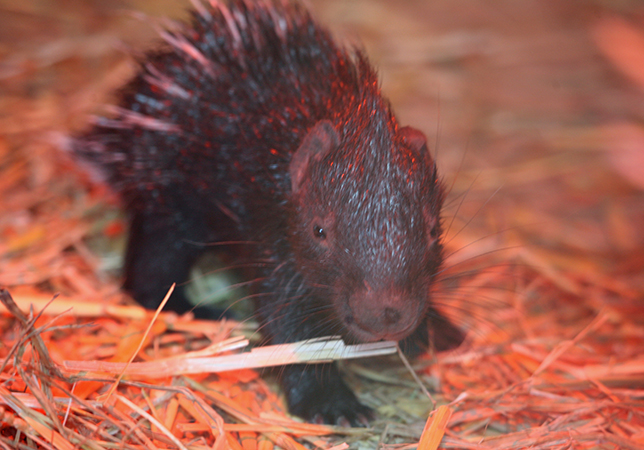 Hopeful that the new pair would one day produce their first litter, keepers were slightly surprised to discover two tiny new arrivals during their early morning checks. Estelle explains: “Hannah gave birth overnight and I found the babies running and squeaking at each other in the morning. On the first checks, both adults were asleep with the Porcupettes tucked underneath them so they weren’t discovered until I went into the enclosure to clean and feed them. I suspected Hannah might be pregnant as we had observed them mating frequently but we didn’t expect them to be born quite so soon! I even saw Prickle mating with her the night before she gave birth. We have sexed the twins and they’re both boys”.

It is only the second time in the Park’s forty-nine-year history this species has successfully bred. The babies, also known as Porcupettes, are on show in the enclosure they share with a group of inquisitive Dwarf Mongooses.

When they were just a few days old, keeper Estelle captured the pups confidently taking their first steps on camera. Footage, including the newborns squeaking to each other and stamping their tiny feet.

Five-year-old Prickle (also the collective noun for a group of Porcupines) and first-time mother Hannah are proving to be formidable parents.

The babies are perfect miniature versions of the adults, even born with a full set of quills. After a gestation period of approximately one hundred and twelve days (the longest gestation period of any rodent), the female gives birth to offspring covered in soft, moist and flexible quills, enclosed in a thin placental sac. Immediately after birth, the quills quickly harden in the air and become prickly. They are born relatively well developed with eyes open and teeth present. 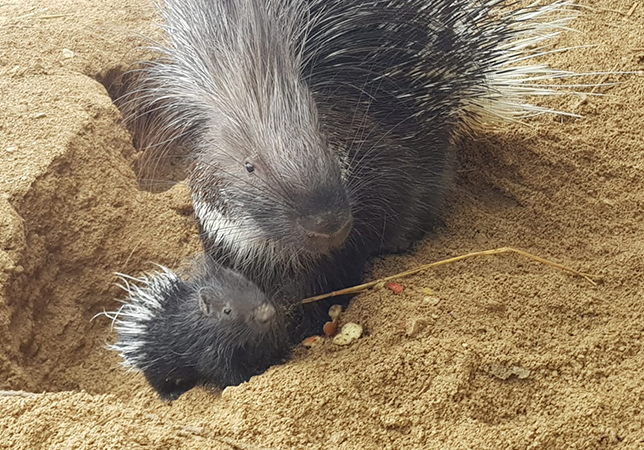 Curator of Cotswold Wildlife Park, Jamie Craig, said: “Baby Porcupines are incredibly popular with our visitors – essentially miniature replicas of their parents. We are always delighted with these additions to the animal collection and it is great to watch them exploring their exhibit with the same feisty attitude as the adults”.

As well as the Porcupettes, the Park is delighted to announce the following new arrivals: 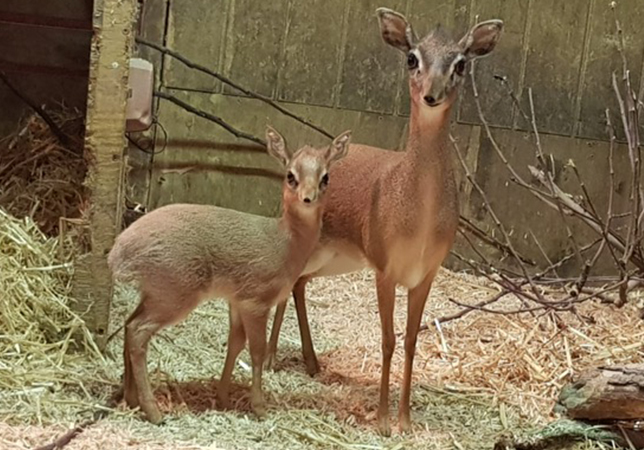 The shy youngster has been named Noodle by her keepers. Visitors can see these delicate dwarf Antelopes in the Little Africa exhibit. 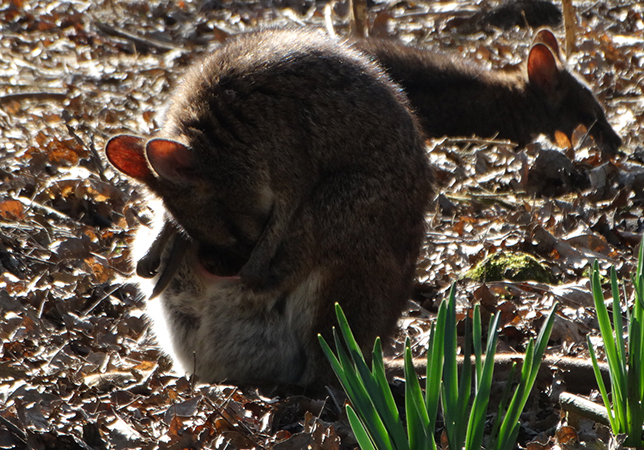 Parma Wallaby joeys have started to venture out from their mothers’ pouches and explore their woodland home by the lake area. 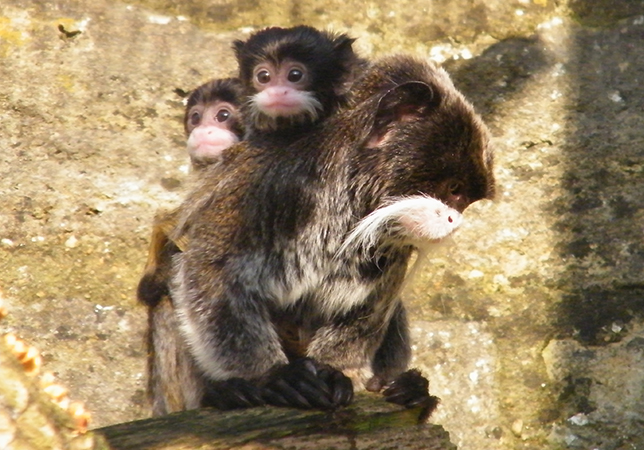 The birth of adorable Emperor Tamarin twins. The moustachioed babies are on show in their exhibit opposite Madagascar. 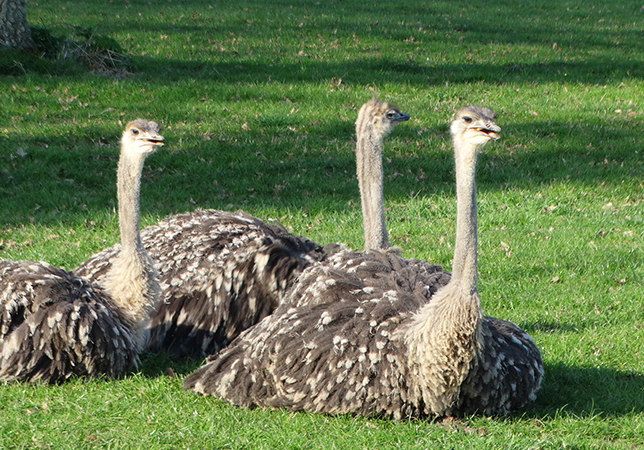 Our breeding Ostrich pair (the world’s largest bird species) recently produced three chicks. Visitors can see the new feathered family in the large grassy paddock as you enter the Park.

They range in size from the dainty Rothschild’s Porcupine to the largest in the world – the African Crested Porcupine. While they differ greatly among species, Porcupines are considered the third largest rodent on earth behind the Beaver and the giant Capybara (who have also recently bred at the Park). Their Latin name means “quill pig”. Porcupines possess a spiny defence that is unique among rodents – approximately thirty thousand sharp quills adorn their back. Contrary to popular belief, they cannot fire their quills at enemies, but the slightest touch can lodge dozens of barbed quills into a predator’s body. They are modified hairs made of keratin (the same material as human hair, fingernails and the horn of a Rhino). Each quill can boast up to eight hundred barbs. If threatened, Porcupines reverse charge into a predator, stabbing the enemy with its sharp quills. The resulting wound can disable or even kill predators including Lions, Leopards and Hyenas. Unfortunately, their unique defence is also the biggest threat to their survival. Although naturally shed, Porcupines are killed for their quills. In traditional African medicine, puncturing the skin with Porcupine quills is believed to heal ailments such as fainting, lethargy, swollen legs and lameness. Porcupine meat is also in great demand for its reputed healing properties. Quills are sought after as ornaments and talismans too.

Considering their spiny amour, how they actually mate without injuring each other is an area of great curiosity from visitors. Mating is a thorny challenge due to the spines and quills of the participants but the answer was discovered in the first scientific study of its kind (published in the Italian Journal of Zoology in 1993*). The nineteen-month study into the mating habits of African Crested Porcupines found that the male prepares for mating by ‘stepping’ with his hind legs on the spot, followed by the female raising her tail onto her back, relaxing her quills, anchoring them firmly against her body and raising her rear. This enables the male to mount her without risking injury from her quills. The male’s forelegs do not hold onto the female’s back at any point. He clasps her sides with his front paws and carefully balances on his hind feet. The study also uncovered that this monogamous species showed an exceptionally long mating pattern (one to five minutes) compared to the known mating behaviours of other Porcupine species.