Belle is the newest addition to the Rhino family at Cotswold Wildlife Park & Gardens. She is the fifth White Rhino to be born at the Burford collection and is Nancy and Monty’s third calf. 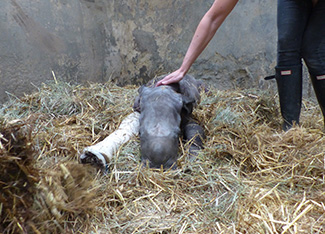 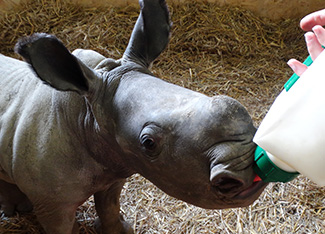 Belle’s start in life was, however, unlike anything the animal team at the Park had experienced before. Due to a medical issue soon after birth, Belle became the first hand-reared Rhino calf in the Park’s history. Hand-rearing the second largest land mammal was a decision not made lightly, as Curator of Cotswold Wildlife Park & Gardens, Jamie Craig, explains: “During the night we got a call from the Mammal team to say Nancy had given birth and all appeared to be well. When we came in to inspect the calf, she was standing next to Nancy and seemed strong. However, when she attempted to walk (always an unsteady moment for a new-born) she stumbled and her right foreleg twisted. She was essentially standing on her carpus joint – a sort of wrist equivalent in humans. Although she righted herself, we noticed that this area now appeared weaker. She stumbled a few times before we finally left her, standing correctly, next to Nancy. Leg weakness and poor coordination are commonly seen in newborns of many species so we left for the night fairly confident that she would be much stronger and stable in the morning”.

The next day, Belle’s issue with her injured leg had escalated and required urgent veterinary attention. Jamie said: “When we arrived at the Rhino House the following morning, it was immediately apparent that there was a major issue. Although lively and attempting to suckle from Nancy, the front right foot was twisted over. After observing the calf for some time, it became clear that she was now walking on the joint and that it would not correct itself. We made the difficult decision to separate her from the adult and called in a vet team to assess the situation and take X-rays of the leg”. 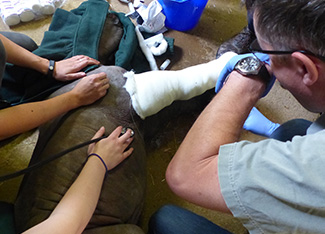 The X-rays showed no evidence of a break or dislocation. Nerve damage (either pre or post-birth) was believed to have caused the foot to twist. Cotswold Wildlife Park has a ‘hands-off’ policy with newborns and only intervenes when absolutely necessary. With the results back in, Jamie explains the next stage: “The decision was made to cast the leg to allow the nerve to recover – a risk in itself as there is no guarantee of success. The initial plan was to cast and reunite Belle and Nancy straight away. Once the cast was on, we had an immediate issue in that the calf would not rouse from the anaesthetic – hardly surprising for an animal less than 24 hours old. After considerable time and effort, the calf finally stood but was struggling to walk with the cast and was visibly in a state of distress. At this point, it was clear that the calf could not be reintroduced to Nancy as she had not yet mastered walking with the cast and her erratic behaviour would have agitated the mother, putting her in an extremely dangerous and potentially fatal situation”.

Another difficult decision had to be made. Jamie said: “To preserve the calf, an extremely important animal for the breeding programme, we had no alternative but to remove her from her mother for the week that the leg was in a cast. After this, we could look at our options. At this time, the calf was weak from exertion and needed to be given regular doses of glucose as her blood sugars had dropped dangerously low. We sat with her through the night to monitor and to attempt to get her feeding from a bottle – a procedure that required huge amounts of patience and dedication. By morning, she had made an excellent recovery and was taking her milk well from a bottle and even walking, albeit clumsily, for short distances”. 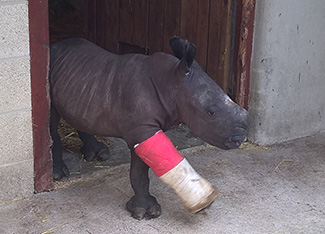 Keepers remained by Belle’s side for the next stage of her recovery. This included spending nights with the young calf in her enclosure. Belle quickly formed a strong bond with her keepers.

Belle’s progress was promising but whether the procedure had worked was still unknown. Jamie said: “The day of the cast removal was nerve-racking as there was no guarantee of success. So we waited with baited breath whilst the cast was gently cut away and she stood on her unprotected leg for the first time. There were a couple of wobbles, as the injured leg was clearly weaker than the others, but the leg stayed straight. Over the next few days, it became stronger. She needed constant supervision from keepers and vets at this stage in what was essentially Rhino physiotherapy.  We ensured Belle was given the correct exercise levels to build up strength and ensure the nerve damage had sufficiently recovered”. 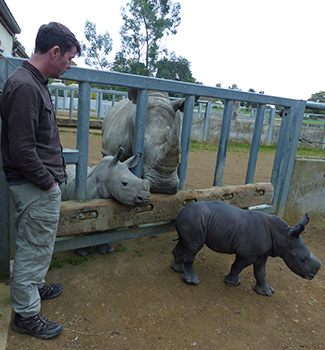 Another hurdle was approaching – reintroducing Belle back to her mother and the rest of the Rhino group. Jamie continues: “At this point, it was vital we got her back into the Rhino House so she could integrate again with her mum and the herd. She was moved to a pen next to the main house so she could first experience all the smells and sounds of the adults and was then introduced to other herd members with a barrier safely between them to avoid accidents. She appeared to get on very well with our other adult female, Ruby, and her new male calf, Alan, who both showed interest (pictured left with Jamie). They would reach over the bars to interact with the calf, who, now she was out of immediate danger, had been named ‘Belle’. At this point, she was taking over 10 milk feeds a day from her keepers, starting at 6 in the morning and finishing at 3am – a trying time for all involved. Over the coming weeks, she spent time with the vet and her keepers to be exercised in the large paddock to ensure she had full mobility. Reassuringly, we have not seen any issues with the injured leg since. 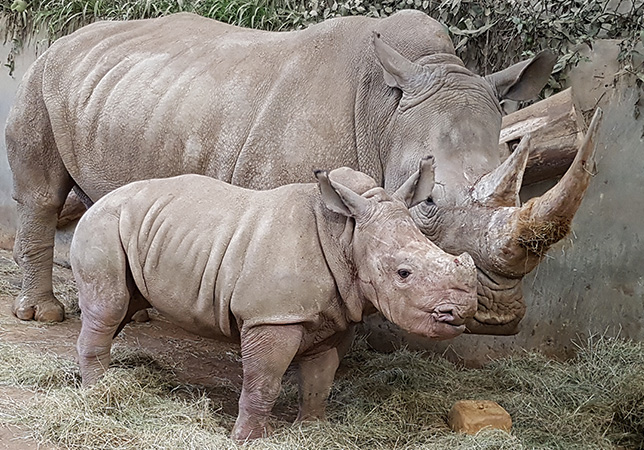 Finally, at over 250kg (when she could cope with the rough side of Rhino society), we physically reintroduced her to Nancy (pictured above). At the moment, she spends most of her day with her mother and we hope soon she will be with her 24-hours a day. There is still a long period of bottle-feeding ahead of us but Nancy allows Belle to come to her keepers for her feeds and appears to be tolerating her belated new addition well. It is unclear if Nancy realises this is her calf, but Rhinos can be amazingly gentle with calves and we hope, whatever the situation, the pair form a strong bond. Over the next week and following months, we will gradually introduce her to the rest of the herd until she is a fully-fledged member of the “crash” here at the Park”.

The White Rhino is living proof of conservation success. They were once the rarest species of any Rhino and were on the verge of extinction in the early 1900s, when it was believed only some fifty animals remained in their native South Africa. Thanks to excellent and sustained protection, they are now the most common of the five Rhino species, although poaching in the last five years has once again escalated to serious levels. Three of the five Rhino species – the Black, Javan and Sumatran – are critically endangered.