After three months secluded in their nest box, rare Red Panda twins Ralph and Rufus have finally emerged from the den, making their public debut at Cotswold Wildlife Park. 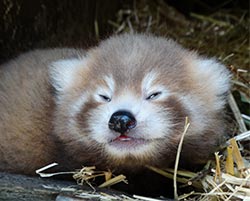 Visitors can now see the young cubs (and their parents) exploring their enclosure. This is the second litter for mother Scarlet and father Doodoo. Back in 2012, Scarlet gave birth to the first Red Panda cubs to be born at the Park in over ten years.

Jamie Craig, Curator of Cotswold Wildlife Park, commented: “Scarlet and Doodoo have been incredible parents and their youngsters have been sent to several European Zoos as part of the breeding programme. Currently, the new babies are taking their first tentative steps in the trees and if possible, looking even cuter than their parents.”

Red Pandas lead mainly solitary existences in the wild except during mating season. Like the Giant Panda, the female is fertile for just one day a year and can delay implantation until conditions are favourable. 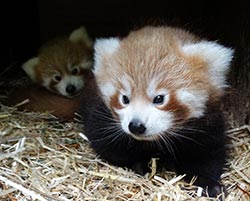 These shy creatures have a relatively long gestation period of around one hundred and thirty-five days and typically produce litters of just two cubs. Newborns are born blind and helpless, opening their eyes at around eighteen days. For the first few months, they remain entirely reliant on their mother for survival. Males take very little interest in their offspring. Because their main natural diet of bamboo is a poor one (a low energy source and hard to digest), young cubs grow very slowly. Sadly, infant mortality rates are high with this species, so these new births are exciting news for the European Breeding programme (EEP) in which Cotswold Wildlife Park participates.

Described as “the 19th most globally threatened species” by the Edge of Existence Programme, it is believed fewer than ten thousand Red Pandas remain in the wild – habitat loss and fur hunting being the main culprits for their decline in numbers. The International Union for the Conservation of Nature (IUCN) has classified this gentle species as “Vulnerable” (considered to be facing a high risk of extinction in the wild).

In 1825 French zoologist Frédéric Cuvier awarded the species its name, Ailurus fulgens, meaning shining or fire-coloured cat. He also described it as “quite the most handsome mammal in existence.” Often dwarfed by its black-and-white cousin, Red Pandas were discovered forty-eight years before the first Giant Panda was catalogued. Despite its name, it is only distantly related to the Giant Panda.