A Giant Anteater baby makes his debut at Cotswold Wildlife Park. The pup, named Nelson, is the second breeding success for parents Zorro and Zeta since their arrival at the Burford collection in 2010. Keepers named the newborn after the late singer – Prince Rogers Nelson. Visitors can see the Anteater family in the enclosure they share with Capybaras (the world’s largest rodent) and Crested Screamers (not named after the late singer) – species also native to Central and South America.

Anteaters are generally solitary animals, except during the mating season. After a gestation period of around 190 days, the female produces a single pup which weighs approximately 1.3kg. The female gives birth standing up and the young Anteater immediately climbs onto her back. The young are born with a full coat of hair and adult-like markings, aligning with their mother’s camouflaging. A mother will carry the baby on her back for approximately 6 to 9 months (until it is almost half her size). The young suckle for 2 to 6 months and become independent after roughly 2 years, or when the mother becomes pregnant again.

Curator of Cotswold Wildlife Park, Jamie Craig, commented: “Zeta has again proved to be an excellent and diligent mother. We are extremely proud of her here at the Park and it is great to see another healthy baby growing rapidly and exploring his surroundings from the safety of his mother’s rather formidable back!” 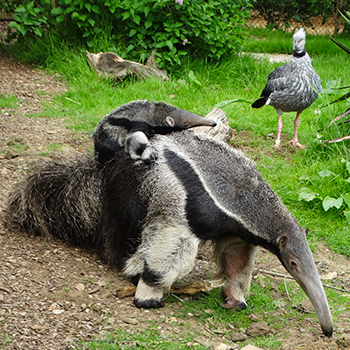 The Giant Anteater is considered to be the most threatened mammal of Central America and is feared extinct in Belize, El Salvador, Guatemala and Uruguay, according to the International Union for Conservation of Nature (IUCN). Giant Anteaters are listed as Vulnerable on the IUCN’s Red List of Threatened Species. Habitat loss, roadkills, hunting and wildfires have substantially affected their population numbers over the last ten years. Scientists estimate that 5,000 individuals are left in the wild. 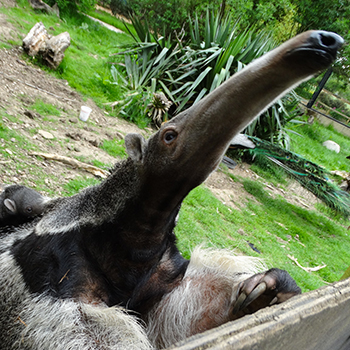 Giant Anteaters (Myrmecophaga tridactyla) are the largest of the four Anteater species and boast one of the most fascinating tongues in the animal kingdom. They are specialist predators of termites and ants and may consume tens of thousands of these tiny nutritious insects every day. Anteaters are edentate animals—they have no teeth.  Ant and termite nests are ripped open with their powerful claws and the tongue acts as animated fly-paper. These tongues can protrude more than 2 feet (60 cm) to capture prey. Ants possess a painful sting when attacked so Anteaters have to eat quickly. They do so by flicking their tongue up to 160 times per minute to avoid being stung. An Anteater may spend only a minute feasting on each mound. They never destroy a nest, preferring to return and feed again in the future.

Giant Anteaters are prey for Jaguars and Pumas in the wild. They typically flee from danger by galloping away, but if cornered, they use their immense front claws to defend themselves, rearing up on their hind legs, striking their attacker violently with their powerful claws and are capable of inflicting fatal wounds to predators.