It’s been over eight years since the Chilean Flamingos colony last produced eggs at Cotswold Wildlife Park. Despite plenty of displaying, nest-building and mating, keepers have been patiently waiting for the flock of forty-four adults to produce eggs. Despite their valiant efforts, no chicks appeared. 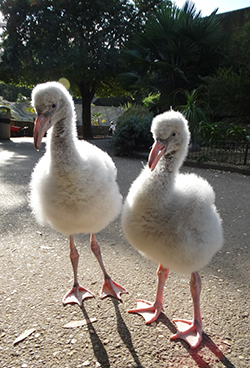 The decision was made to add new chicks to the flock in the hope this would stimulate the existing adults into laying their own eggs again and increase the flock’s size. In the wild, Flamingos nest in large groups. These crowded conditions are ideal for Flamingo breeding as it gives the flock a sense of stability, which, in turn, profoundly increases their chances of successfully producing eggs.

Flamingo eggs were donated by Chester Zoo as part of the European Breeding Programme (EEP) and were immediately taken to the Park’s incubation rooms. The chalky white eggs hatched after roughly twenty-six days. Keepers named the new chicks Mambo and Ringo and tended to them around-the-clock.

By a strange coincidence, while the donated eggs were still in incubation, much to the surprise of keepers, the adults had made nests and were sitting on their own eggs for the first time in eight breeding seasons. Three chicks eventually hatched. In the meantime, Mambo and Ringo continued to be hand-reared by the dedicated team, undergoing health checks, growth monitoring and regular exercise, including daily walks to strengthen their delicate legs.  Eventually, the task of gradually introducing the new chicks to the adult group began. 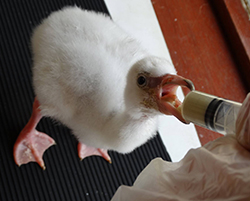 Assistant Curator of Cotswold Wildlife Park, Chris Kibbey, commented: “Not only is it great news that the Bird Section have successfully hand-reared their first ever Flamingo chicks, but to discover our Flamingos group had laid their first eggs in eight years was a wonderful and unexpected surprise. It’s been a long wait, and we are delighted that our Flamingo flock have finally started breeding again.”

Successful introduction to the flock.

Mambo and Ringo have now successfully been introduced to the flock in their new lakeside home, a brilliant end to several barren years on the Flamingo Lake. Hopefully, next year the Flamingos will successfully breed again without a helping hand from keepers.

It’s been a stand-out year for the Bird Section. 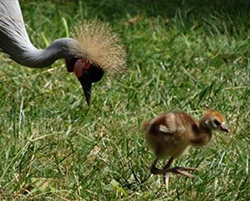 The majestic East African Cranes produced their first ever chick in the Park’s forty-five year history. The male (named Johnny, pictured right with his chick) is quite a character and can be seen fiercely protecting his offspring in their enclosure next to the Flamingos.  Six Penguin chicks also successfully hatched earlier in the year. Incredibly, twenty-three year old Mushy (the oldest Penguin at the Park) managed to produce a chick again this year. In the wild, Penguins would be lucky to reach such an age. Possibly the most amazing additions to the Bird Section were three Endangered Mauritius Pink Pigeon chicks. Although once common, numbers declined to just ten wild individuals in 1990, and were it not for intervention, they would have rapidly become extinct. Cotswold Wildlife Park is committed to the EEP of this species and remains one of the main zoological collections to successfully breed these beautiful birds.