Cotswold Wildlife Park is celebrating the birth of a White rhino calf. The newborn male, named Alan, is the newest additions to the “crash” (the collective noun for a group of Rhinos) at the Burford collection. 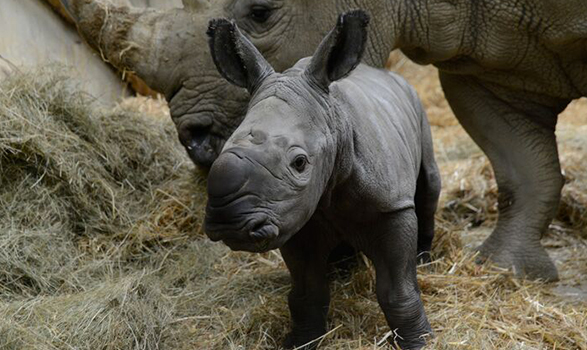 It’s been a remarkable few years for the Rhino family. After almost forty years of hoping the Rhinos would breed, history was finally made in 2013 with the birth of Astrid. She was the Park’s first Rhino breeding success. Since then, thanks to the dedication of the mammal keepers, the breeding programme has gone from strength to strength. This new arrival is the fourth White rhino to be born at the Park.

Alan is Ruby and Monty’s second calf. When he was just one-week old he weighed around eleven stone. He is proving to be a high-spirited and boisterous youngster. Ruby continues to impress keepers with her skills as an exceptional and protective mother. Alan is named in honour of the Park’s electrician who retires this year after twenty-three years of dedicated service.

Managing Director of Cotswold Wildlife Park, Reggie Heyworth, said: “Everyone is over-joyed about the birth of another Rhino calf to Ruby, who is being such a good mother, for the second time.  The calf looks like a strong lad already, and the rest of the Rhino “crash” seem to be taking his arrival in their stride. With Rhinos facing such poaching pressures in the wild, every birth in captivity is a sign of hope for this wonderful species”. 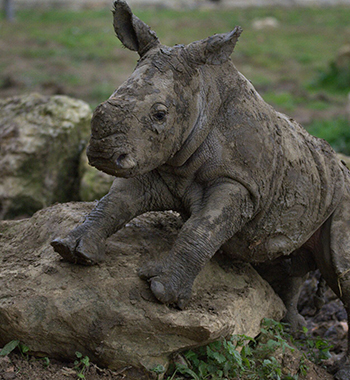 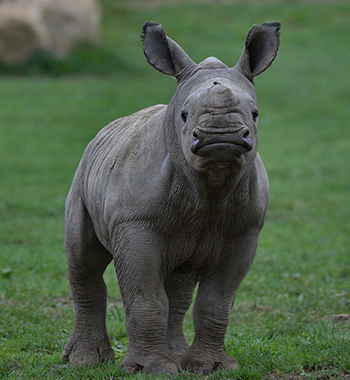 Births in captivity are considered extremely rare, with only thirteen White rhinos being born in European zoos in the last twelve months.

Females only reproduce every two-and-a-half to five years, so the window of opportunity for successful reproduction is limited. After a gestation period of sixteen to eighteen months, a single calf is born. This is one of the longest gestation periods of any land mammal, surpassed only by the twenty-two month gestation period of an Elephant. A newborn Rhino calf will stand up within one hour of birth and immediately attempt to suckle, although he or she may be a little unsteady on their feet for the first few days. It will remain under the watchful eye of the mother, suckling from her for approximately one year. Their bond is an intensely strong one and the calf will remain with its mother for at least two years, benefiting from her protection. Females guard their offspring aggressively and are intimidating adversaries if challenged.

The White Rhino is living proof of conservation success. They were once the rarest subspecies of any Rhino and were on the verge of extinction in the early 1900s, when it was believed only some fifty animals remained in their native South Africa. Thanks to excellent and sustained protection, they are now the most common of the five Rhino species, although poaching in the last five years has once again escalated to serious levels. Three of the five Rhino species – the Black, Javan and Sumatran – are critically endangered.

Poaching for their horns remains the biggest threat to these iconic animals. Recently HRH Prince William warned: “Rhinos face extinction in our lifetime as we struggle to correct lies about the supposed benefits of using its horn as a drug”. There is no evidence that horns, made of the same substance as human fingernails and hair, have any medicinal value. However, the false belief that Rhino horn can cure cancer and other life-threatening diseases has resulted in a population slaughter of one thousand and fifty four Rhinos in South Africa alone in 2016.