Ten years ago, Cotswold Wildlife Park’s interactive Lemur exhibit, Madagascar, officially opened to the public. On the exhibit’s anniversary, the Primate team is thrilled to announce the birth of a Collared Lemur – bringing the total numbers of Lemur breeding successes to 55 since Madagascar officially opened a decade ago. Visitors can see the tiny newborn in the exhibit it shares with a troop of 18 other free-roaming Lemurs and nine Madagascan Birds.

Females are only sexually receptive for two or three days a year, so the window of opportunity for males to father offspring is small. After a gestation period of approximately 165 days, mum Anais gave birth. The baby’s father is called Varika. Natalie Horner, Deputy Section Head of Primates, said: “On 5th May, we discovered that our female Collared Lemur, Anais, had given birth that very morning. Anais is an experienced mum so did brilliantly during the delivery and was already cleaning the baby up ready for its first feed. Lemur babies only weigh around 80g when first born but are able to cling to their mum’s fur and clamber around to find the best feeding position. At the moment, the baby is spending most of the time feeding and sleeping. Apart from upping her daily diet, we don’t interfere and leave everything in mum’s capable hands – just observe from afar to make sure both mother and baby are bonding and doing well”. 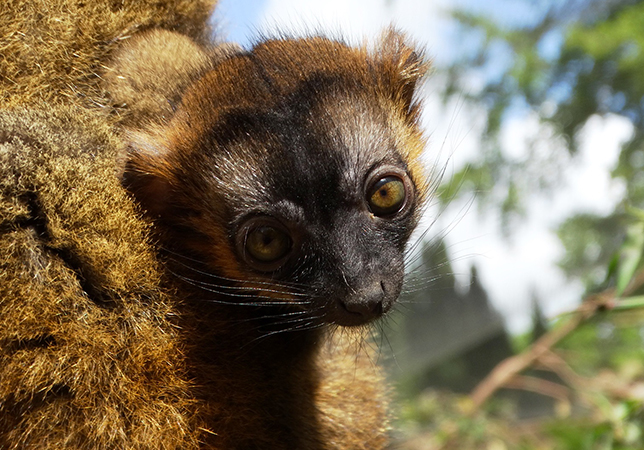 To highlight the plight of the world’s most endangered Lemurs, Cotswold Wildlife Park will dedicate 26th May – 3rd June 2018 to ‘Lemur Week’. Its aim is to raise awareness and funds for the Park’s conservation projects helping to save the world’s most threatened Lemurs from extinction. As part of ‘Lemur Week’, visitors will have the chance to name the new Collared Lemur baby, as well as take part in a variety of Lemur-themed activities. Click here to read more about the Park’s conservation projects. 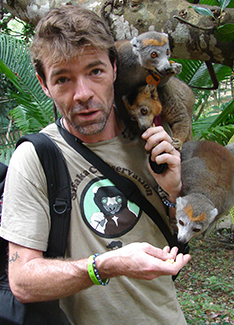 The Park’s walk-through Lemur exhibit, Madagascar, was the brainchild of Jamie Craig, Curator of Cotswold Wildlife Park (pictured on a recent research trip to Madagascar). One of Britain’s best-loved TV presenters and comediennes, Ruby Wax, officially opened the exhibit in 2008. A year in the making, at a cost of £250,000, its aim was to take visitor/animal engagement to a new level. Visitors would get to experience the incredible wildlife of Madagascar and witness Madagascan animals up close within an exhibit where the wildlife is free to roam. Madagascar is a revolutionary way of seeing the island’s many fascinating and endangered animals at close quarters, in a large, open-air exhibit. Looking back on its anniversary, Jamie Craig said: “Since its opening, our Madagascar exhibit has been an outstanding success both for our visitors and its inhabitants. We have enjoyed excellent breeding results and the combination of healthy, happy animals has enabled us to develop an extremely successful conservation programme in Madagascar. Our projects for Greater Bamboo Lemurs and Crowned Sifaka have directly contributed to assisting these species in the wild where they are critically endangered”.