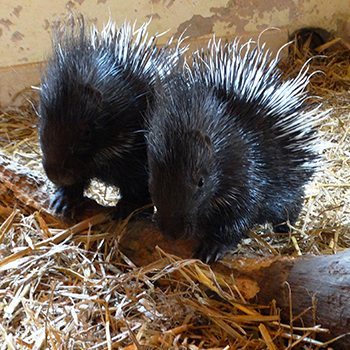 Cotswold Wildlife Park is celebrating the birth of the first Porcupine twins in the Park’s forty-seven-year history. The as-yet-unnamed and unsexed twins were born recently to first-time mother Stempu and father Prickle. The newborns are on show in the enclosure they share with a trio of inquisitive Dwarf Mongooses.

The twins are perfect miniature versions of the adults, even born with a full set of quills, which begs the question visitors have been keen to ask keepers – how does the female give birth without injury? After a gestation period of approximately one hundred and twelve days (the longest gestation period of any rodent), the female gives birth to offspring covered in soft, moist and flexible quills, enclosed in a thin placental sac. Immediately after birth, the quills quickly harden in the air and become prickly. The babies, also known as Porcupettes, are born relatively well developed with eyes open and teeth present. 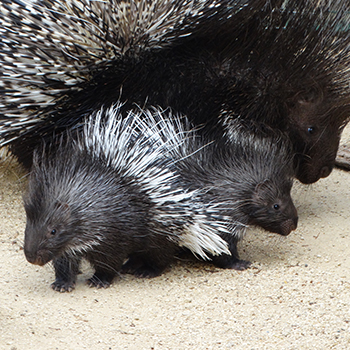 African Crested Porcupines (Hystrix cristata) are the largest of the twenty-five Porcupine species. They are also the third largest rodent in the world, behind the Beaver and Capybara. Their Latin name means “quill pig”. Porcupines possess a spiny defence that is unique among rodents – approximately thirty thousand sharp quills adorn their back. Contrary to popular belief, they cannot fire their quills at enemies, but the slightest touch can lodge dozens of barbed quills into a predator’s body. Quills are modified hairs made of keratin (the same material as human hair, fingernails and the horn of a Rhino). Each quill can boast up to eight hundred barbs. If threatened, Porcupines reverse charge into a predator, stabbing the enemy with its sharp quills. The resulting wound can disable or even kill predators including Lions, Leopards and Hyenas. 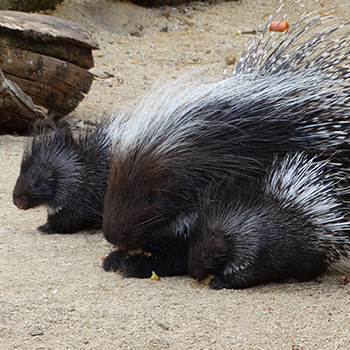 Section Head of Primates, Chris Kibbey, commented: “Dad Prickle and mum Stempu were introduced in October 2016 and it wasn’t long until love blossomed and keepers were delighted to recently discover little Porcupettes running around the enclosure. The babies are born about Guinea Pig-sized and although are born with quills, they are soft at birth, making things considerably easier for mum.  The twins (pictured right) are doing really well and have already developed their mother’s habit of stamping their feet, indicating their frustration at keepers disturbing them.”

Four-year-old Stempu is notorious for her feet stamping (her name means ‘stamp’ in Swahili) and she protects her first litter with great ferocity. Her pups were recently caught on camera stamping their tiny feet.

Three-year-old Prickle (also the collective noun for a group of Porcupines) is far more relaxed and both are proving to be formidable parents.

Another area of great curiosity from visitors is how do Porcupines actually mate? Mating is a thorny challenge due to the spines and quills of the participants but the answer was discovered in the first scientific study of its kind (published in the Italian Journal of Zoology in 1993*). The nineteen-month study into the mating habits of African Crested Porcupines  found that the male prepares for mating by ‘stepping’ with his hind legs on the spot, followed by the female raising her tail onto her back, relaxing her quills, anchoring them firmly against her body and raising her rear. This enables the male to mount her without risking injury from her quills. The male’s forelegs do not hold onto the female’s back at any point. He clasps her sides with his front paws and carefully balances on his hind feet. The study also uncovered that this monogamous species showed an exceptionally long mating pattern (one to five minutes) compared to the known mating behaviours of other Porcupine species.