Home : What’s On : Park News : The fortunate foal: Meet the Zebra born on Friday the 13th at Cotswold Wildlife Park.

The fortunate foal: Meet the Zebra born on Friday the 13th at Cotswold Wildlife Park.

Considered by many to be one of the unluckiest days of the year, thankfully, for the keepers at Cotswold Wildlife Park, a fortunate event occurred on Friday the 13th this year. They discovered that Zebra mare Stella had given birth to a female foal. This is her fourth baby with stallion Spongebob. 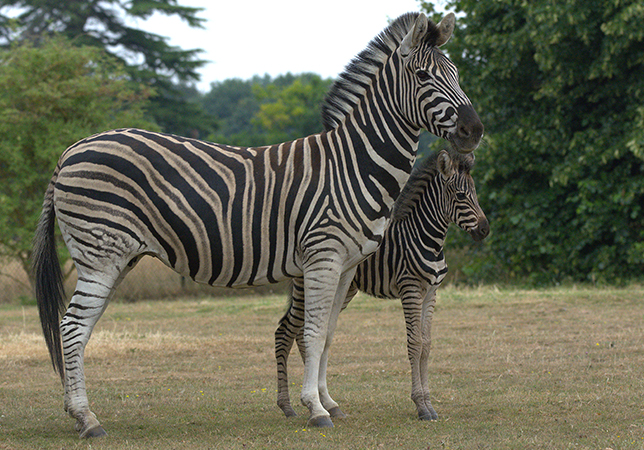 The energetic newborn is fast on her feet and was filmed galloping around the paddock when she was just over a week old – much to the delight of visitors who were amazed at the tiny foal’s speed.

Visitors can see the youngster in the Zebra enclosure opposite the Rhino paddock.

Curator of Cotswold Wildlife Park, Jamie Craig, commented: “For once, Friday the 13th proved very lucky. The foal was up and about very quickly and, despite a distinct lack of coordination, was soon dashing around the paddock. Luckily for her, she was able to enjoy the benefits of a rare hot British summer and continues to go from strength to strength”. 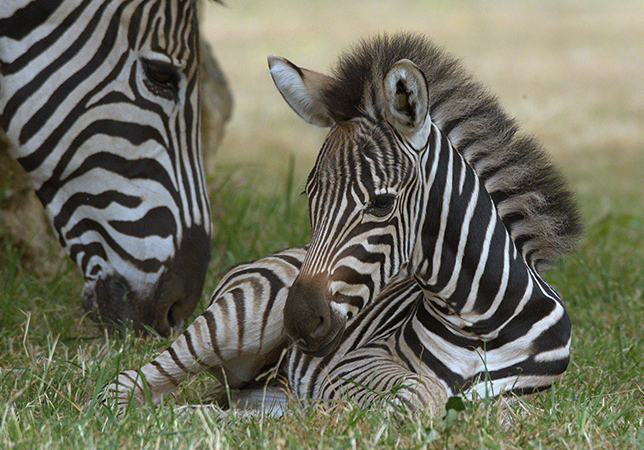 Cotswold Wildlife Park has been home to these iconic African animals since 1976 (early archive photograph pictured below of a fearless Grevy’s Zebra chasing one of the Park’s Rhinos around the paddock). 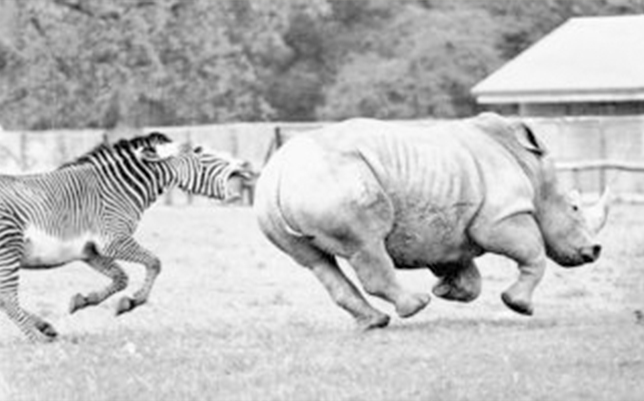 The first Chapman’s Zebra (Equus quagga chapmani) arrived at the Burford collection in 1978, eight years after the Park first opened to the public on Good Friday, 27th March 1970. This latest arrival marks the forty-fifth Chapman’s Zebra birth – a testament to the Park’s successful breeding programme.

The gestation period for a Zebra is approximately twelve months. Females give birth to a single foal.  Soon after birth, they are able to stand up and walk. During the first few weeks of life, the mother is very protective. The foal recognises its mother by her call, her scent and her stripe pattern*. The mare’s protectiveness ensures that the foal will not imprint on another animal. The mare will suckle her foal throughout and beyond its first year and their bond is an incredibly strong one.

Zebras are the only wild horses that remain plentiful in their natural range in the African plains. They are related to the now extinct Quagga (a cross between a Zebra and a horse) of which millions were killed, many simply for sport. Some were transported to zoos where breeding was thought unnecessary, as it was believed numbers weren’t a concern in the wild. Sadly, the last Quagga died in Amsterdam Zoo on 12th August 1883.

In 2012, researchers at Sweden’s Lunds University examined potential evolutionary reasons for the Zebra’s distinctive striped markings. They began by studying horses that had black, brown or white coats. They discovered that white-coated horses were much less troubled by horseflies than their dark-coloured relatives. By setting up insect glue-covered boards with different patterns, researchers found that a white-and-black striped pattern, replicating the coat of a Zebra, attracted the least amount of flies by a large margin. Their research revealed that stripes probably evolved to repel bloodsuckers by successfully scrambling their vision.