D’ora is the newest addition to the Rhino family at Cotswold Wildlife Park & Gardens. She is the seventh Rhino calf to be born at the Burford collection and is Monty and Nancy’s fourth breeding success together. Her birth is testament to the dedication of the mammal keepers and the Park’s commitment to the European Breeding Programme (EEP). 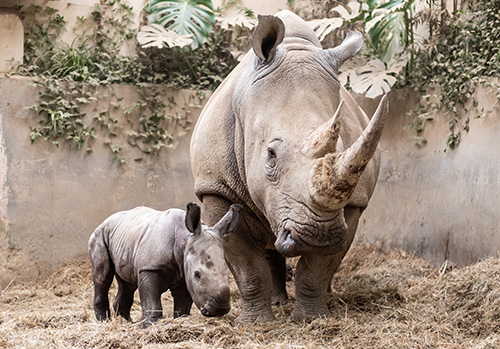 As the Park celebrates its golden anniversary this year, an apt name was chosen for the new calf. Incorporating the French word for gold – ‘or’, she has been named D’ora. After one of the most challenging years in the Park’s fifty year history, D’ora’s arrival is a great boost. She made her debut in front of nearly two million people when ITV’s Good Morning Britain broadcast live from the Park recently and made headlines when her photo accidentally interrupted American President Donald Trump blasting his rival candidate Joe Biden during a live news report (pictured below, credit: ITV). 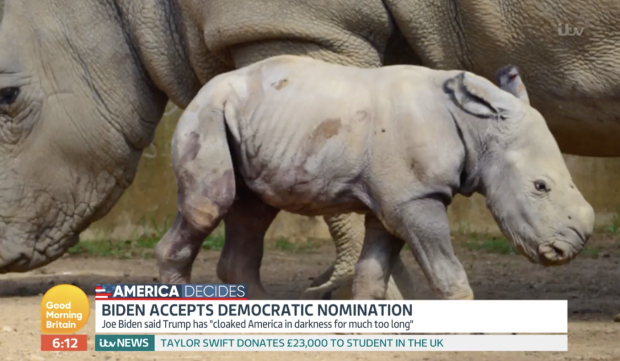 The youngster is proving to be a high-spirited and boisterous addition to the “crash” (the collective noun for a group of Rhinos). She has been delighting visitors with her energetic outbursts. Videos of D’ora can be seen in the video below. They include footage of the new arrival when she was just a few hours old and her first venture out onto the Rhino paddock.

Cotswold Wildlife Park is committed to Rhino conservation and works closely with the UK based conservation charity Tusk Trust to protect Africa’s many threatened species. 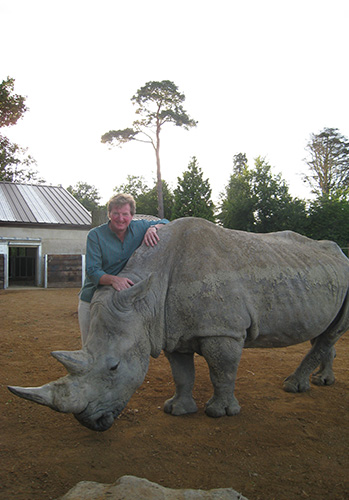 The effects of the coronavirus pandemic have had a devastating impact on Rhino conservation and poaching has once again escalated to serious levels. Reggie Heyworth (pictured above), the Park’s Managing Director and a Tusk Trust Ambassador, explains: “Conservation programmes throughout Africa’s wildlife areas and national parks often depend on income from tourism and support from charities such as Tusk Trust. With so few tourists visiting Africa, it is all the more important for us to support the work of Tusk Trust, who fund over forty programmes throughout sub-Saharan Africa, including vital work to protect rhinos and elephants from poachers”. For more information about Tusk Trust, please visit www.tusk.org.