On Valentine’s Day, a rare introduction is taking place inside the Park’s Tropical House. 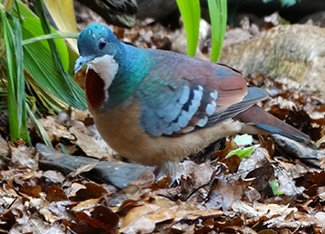 A stunning Mindanao Bleeding heart dove female is being introduced to her new mate for the first time.

The four-year-old female arrived at the collection last year. On Valentine’s Day she will be introduced to her new mate who recently arrived at the Park. His fourteen-day quarantine period ends on February 14th. These rare birds are part of a European Endangered Species Programme (EEP) and keepers hope they will eventually produce chicks of their own.

Habitat destruction (particularly for high value crops such as sugar cane), hunting and capture for the wild bird trade have had a devastating effect on wild population numbers. They are listed as vulnerable on the IUCN* Red List of Threatened Species (considered to be facing a high risk of extinction in the wild). There are five species of Bleeding heart doves and they are found only in the Philippines.

This species (Gallicolumba crinigera) are remarkable for their breast markings, which appear like a deep, bleeding heart. These are a fairly shy species which spends most of their time on the ground searching for food. 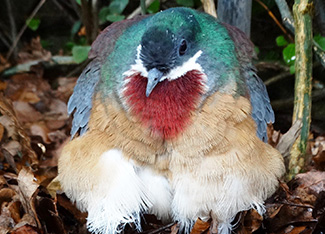 Visitors can see the new pair in the Tropical House, which is also home to the critically endangered Bali starling – one of the rarest birds in the world. Population numbers are estimated to be fewer than fifty individuals left in the wild.

Cotswold Wildlife Park is part of Eaza’s Silent Forest campaign. To find out more about this campaign, please visit: https://www.silentforest.eu

*International Union for Conservation of Nature.