A member of staff at Cotswold Wildlife Park & Gardens has donated thirty centimetres of her hair to one of her favourite charities – the Little Princess Trust.

Leanne Williams has been growing her hair for the past eighteen months especially for the charity. The Little Princess Trust provides real hair wigs, free of charge, to children across the UK and Ireland who have sadly lost their own hair due to cancer treatment and other illnesses. 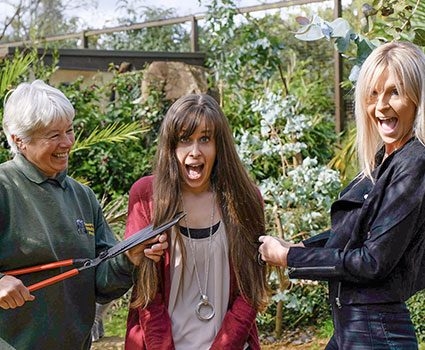 The charity haircut took place in the Park’s interactive Lemur exhibit – ‘Madagascar’. Leanne had an audience of inquisitive free-roaming Ring-tailed and Red-bellied Lemurs watching, as well as her colleagues from the Park. The exhibit is home to some of the rarest Lemur species on earth, including the Critically Endangered Greater Bamboo Lemur. One of the Park’s gardeners, Mandy Hicks, offered her topiary skills to help cut Leanne’s hair with her trusty pair of garden shears, but Leanne opted for the services of professional hairdresser Lauren Griffin from Essence Hair Salon (based in Bourton-on-the-Water) who generously volunteered her time for the fundraising event.

The charity recently received worldwide attention when Harry Styles donated his hair to the Little Princess Trust. Harry’s first acting role in the critically acclaimed film ‘Dunkirk’ required a drastic haircut resulting in Harry’s hirsute donation to the charity. A photo he posted on Instagram of his newly trimmed locks reached over one million likes within five hours. Harry also performed a secret gig in London earlier this year and donated all the proceeds from the show to the Little Princess Trust.

In addition to donating her hair, Leanne is hoping to raise funds for the charity too. It takes approximately seven to ten hair donations to make just one single wig. The cost to make one wig can be over £500. 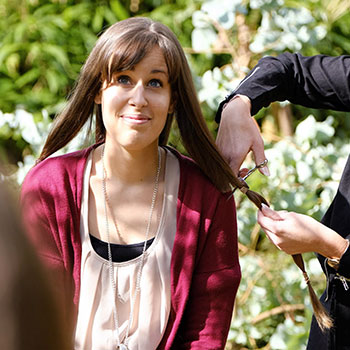 If you would like to support Leanne’s fundraising, please visit: http://uk.virginmoneygiving.com/fundraiser-web/fundraiser/showFundraiserProfilePage.action?userUrl=Leanne12. 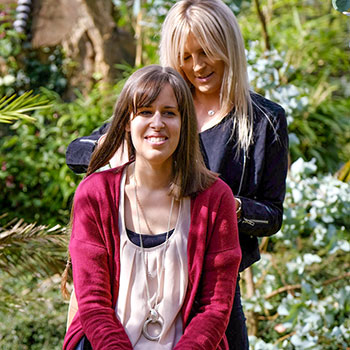 Leanne said: “I first heard about the Little Princess Trust about eighteen months ago when a friend told me she had donated her hair. I’ve always had fairly long hair and wanted it cut quite short but when I heard about the charity and the work they were doing, I decided to keep growing it. So, for the past eighteen months, I’ve grown my hair in order to donate the ideal length of approximately thirty centimetres. Around ten centimetres of hair is lost due to the knotting process to make the wig, so the longer the hair the better!” Leanne added: “The charity was set up in 2006 in memory of Hannah Tarplee who sadly lost her battle with cancer. Hannah’s illness was diagnosed during her first term at primary school and she lost her hair whilst having chemotherapy treatment. Hannah’s parents struggled to find a suitable wig in a child’s size and they ended up having one specially made at great expense.”

Commenting on her donation, Leanne added: “I really hope my hair will make a big difference and contribute towards the amazing work that the Little Princess Trust does. I really appreciate all the support I’ve received and wish to thank everyone who kindly donated.”

Helen Creese from the Little Princess Trust said: “We are delighted to hear that Leanne has decided to cut her hair and donate it to the Little Princess Trust. It’s a brave decision to cut off a lot of hair – especially with an audience of awesome animals! We are hugely grateful as we can use Leanne’s donated locks to make real hair wigs for boys and girls who have lost their own hair. Receiving a wig has a profoundly positive effect on those we assist. Thank you Leanne and thank you to all of your supporters including Cotswold Wildlife Park and Lauren Griffin from Essence Hair Salon in Bourton-on-the-Water who cut Leanne’s hair for free.”