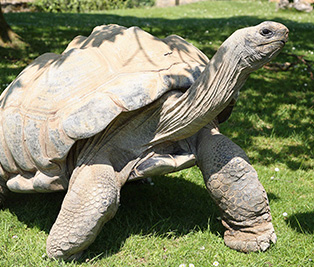 HABITAT & DISTRIBUTION
Found in grassland, scrub areas, mangrove swamps and coastal dunes of the Aldabran Islands (the Seychelles) and Zanzibar in the Indian Ocean.

WHAT THEY EAT
Mainly vegetation and small invertebrates, will also eat carrion and occasionally the dead bodies of other tortoises! Captive individuals need a varied diet and individuals that are fed only on lettuce/tomato end up with bones that collapse and can no longer support their weight.

This species is found both individually and in herds. They are mostly active during the morning and spend the rest of the day either in burrows or swamps to keep cool.