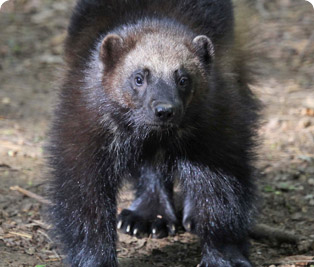 AGE
Wolverines live up to 7 years in the wild but up to 15 years in captivity.

HABITAT & DISTRIBUTION
Wolverines are found in isolated areas of Canada, North West USA, Northern Europe and Northern & Eastern Asia. They live in dens amongst roots and rocks or sometimes they dig one into a snow drift.

WHAT THEY EAT
Their diet mainly consists of meat but Wolverines are mainly omnivores. They are known to eat deer, hares, rodents, birds, eggs, carrion and seasonal fruits.

The wolverine is a powerful animal that resembles a small bear but is actually the largest member of the weasel family.