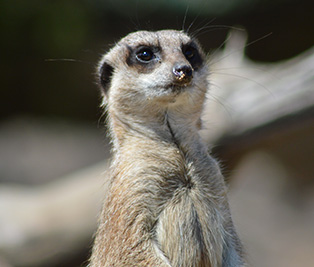 AGE
Meerkats live up to 10 years in the wild but up to 15 in captivity.

HABITAT & DISTRIBUTION
Rocky grassland, scrub and desert in the Kalahari desert , which extends through south Angola, Namibia and Botswana, all in southern Africa. They are diurnal (active during the day) and at night live in burrows, which are complex tunnel systems consisting of mounds, access holes and tunnels which lead to numerous sleeping chambers.

WHAT THEY EAT
Bulbous roots constitute a large part of their diet but they also dig up grubs, catch locusts and other insects. They may also eat reptiles, small mammals, birds and eggs.

Meerkats typically live in groups of up to 25 animals but communities may get as large as 40 individuals. They are unusual as they depend on each other for survival.