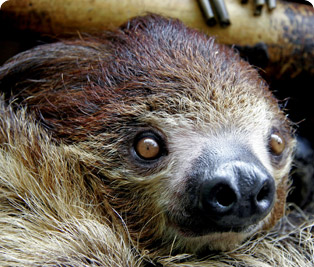 AGE
The average life span of two-toed sloth is 20 years in the wild, but ages of 30 to 40 years have been recorded in captivity.

HABITAT & DISTRIBUTION
The Two-toed Sloth is found in tropical moist lowland and montane forest throughout Venezuela, the Guianas and the northernmost parts of Brazil, Ecuador and Peru.

WHAT THEY EAT
Sloths primarily eat vegetation such as leaves, twigs and fruits; however, they have been known to eat insects and other small prey.

This species is solitary and arboreal, meaning that they live mostly on their own coming together only to breed, spending most of their time in trees.