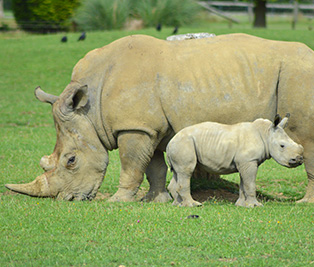 HABITAT & DISTRIBUTION
The Southern White Rhino is found in flat open woodland close to open grasslands, thick brush and water. This species was once widespread throughout South Africa south of the Zambesi river. However, by the end of the 19th century this subspecies was on the brink of extinction with only some 20 to 50 individuals left, confined to a small area of South Africa. A concerted effort to protect this area has meant that there are now over 11,500 in the wild and nearly 1000 in reserves throughout South Africa and also some smaller populations in Botswana, Namibia, Swaziland, and Zimbabwe.

WHAT THEY EAT
White rhinos are grazers, feeding on grasses that they crop with their wide front lip.

White rhino females live in large groups of up to 14 individuals. Immature males will often group together too, however mature bulls are usually solitary.