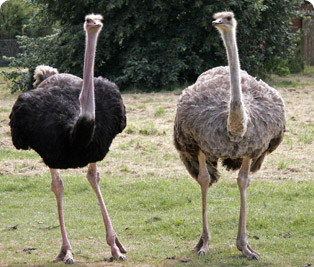 HABITAT & DISTRIBUTION
Grasslands and semi-arid areas (desert) in Africa from Egypt down to South Africa.

WHAT THEY EAT
Ostriches will eat pretty much anything! A large part of their diet consists of plants, especially roots, leaves, and seeds, but they also eat insects and small animals like lizards. Ostriches eat things that other animals cannot digest. They have tough intestines that are up to 14 metres long so that they can absorb as many nutrients from their food as possible. They also swallow sand and small stones to help grind up food in their gizzard.

An average ostrich breeds at 3 to 4 years old and lays eggs weighing 1.5kg (that is 24 times the weight of a chicken egg) and measuring 15cm long. Eggs take between 42 to 46 days to hatch.