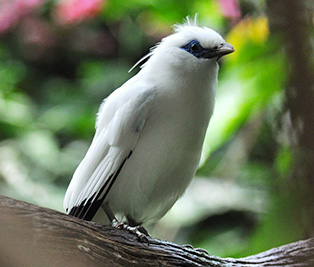 AGE
Can live up to five years in the wild, rising to 15 years in captivity.

HABITAT & DISTRIBUTION
They live in places where there are plenty of trees so that they can find tree holes to nest in. They often nest in old woodpecker holes.

WHAT THEY EAT
Like most types of starlings they have a mixed diet of fruit, seeds and insects. Insects are especially important for young, growing starlings because of the high protein content.

The Bali starling is one of the rarest birds in the world and relatively new to science being first described in 1912 by Walter Rothschild, from whom the bird gains its specific name.