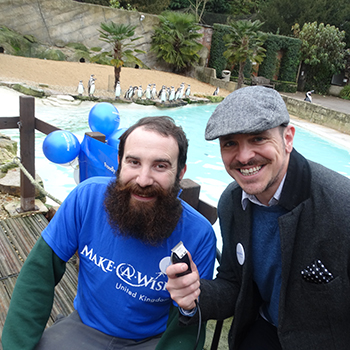 On Monday 14th November, Chris Green, Penguin keeper at Cotswold Wildlife Park, raised over one thousand pounds for Make-A-Wish Foundation by shaving off half of his beard for his favourite charity. Make-A-Wish Foundation grants wishes to enrich the lives of seriously ill children and young people fighting life-threatening conditions. They receive no government funding and rely entirely on the support of fundraisers. 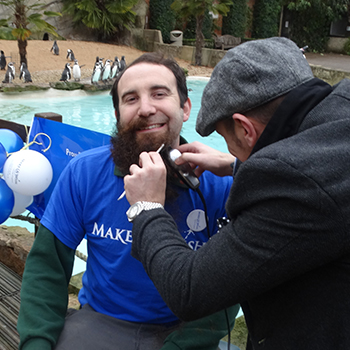 Chris is famous for his beard at the Park. He has even gained a following on social media praising his impressive facial hair. After three years of growing it, he wanted to do something different to raise money for Make-A-Wish Foundation and pledged to shave half his beard off. Staff member Leanne Marrison won the sweepstake to decide whether Chris would lose the left, right or a combination of both sides of his beard. After choosing the left side, barber Michael Anderson (pictured above) generously volunteered his services and gave Chris his first ever professional shave by the Penguin Pool. As soon as the clippers came out, the curious Penguins lined up on the opposite side of the pool and watched their keeper’s close shave for charity.

Thanks to the generosity of visitors, friends and Cotswold Wildlife Park staff, Chris has so far raised £1,272 for the charity. He has vowed to keep his half beard for a further two weeks, in which time he hopes to raise even more funds for Make-A-Wish Foundation. His unusual look has sparked curiosity in visitors who enquire about his bizarre facial hair.  After initial puzzlement, they have been quick to congratulate him on his fundraising efforts and many have donated generously after hearing his story. The donation page will remain open for the next few weeks. If you would like to support Chris, please click on the link: http://uk.virginmoneygiving.com/fundraiser-web/fundraiser/showFundraiserProfilePage.action?userUrl=ChrisGreen41 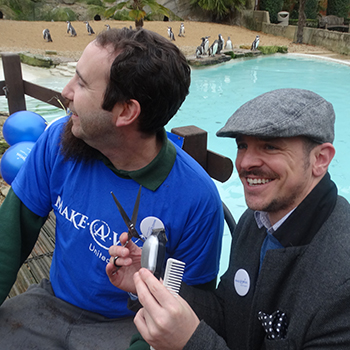 Commenting on his new appearance, Chris Green said: “They say “never do things by halves”, but having just seen the total we’ve raised so far, I have to disagree. My new look may have raised a few eyebrows but it has also raised over £1,000 for one of my favourite charities. You never know, I may even have started a new trend for hipsters! I’m now half the hairy man I used to be but am thrilled that by shaving off half my beard for Make-A-Wish Foundation, we’ve hopefully helped to make a few dreams come true for some incredibly brave children. I’m lost for words at everyone’s generosity. Thanks to all those who have supported me.”

Chris has been a Penguin keeper at Cotswold Wildlife Park for nine years, during which time he has helped with numerous charity events. He dressed up in a Penguin costume for “DreamNight At The Zoo”, a charity event for chronically ill and disabled children and their families who enjoyed the wildlife park after hours. Chris joined other members of staff at Cotswold Wildlife Park by volunteering his time to make the night one to remember. He has compèred the Park’s annual charity dog Scruffs and also won the coveted title of Oxfordshire Cotswolds Tourism Superstar in 2014 and was shortlisted to the national finals in 2015.