Saturday 9th May is World Binturong Day – a worldwide event to raise awareness for this rare and endangered mammal. This year, keepers had hoped to share some exciting news with visitors at the Park – for the first time in its fifty-year history, a Binturong cub has been born at the collection. It seemed rather fitting to announce the new arrival on World Binturong Day but, due to the Park being temporarily closed to the public, the cub will now make her debut on social media. 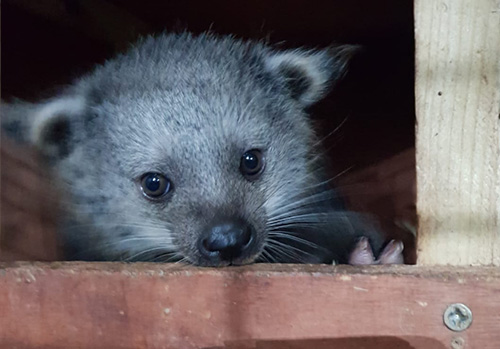 Named Coconut by her keepers, the youngster is the first breeding success from the Park’s adult Binturong pair, Dobby and Himala. Both are proving to be formidable first-time parents. They were introduced to each other in 2018 and soon formed a strong bond. Late last year, their cub was born in seclusion inside the nest box where she spent several weeks out of sight. As time went by, she eventually emerged from her nest box and began exploring her heated indoor home under the watchful eye of her parents. Just as she started to venture out into the exhibit’s outdoor area, lockdown was announced. Keeper Estelle has been keeping a video diary of Coconut’s development for visitors to enjoy and keep up-to-date with her progress until the Park reopens. The footage shows the youngster growing in size and character. 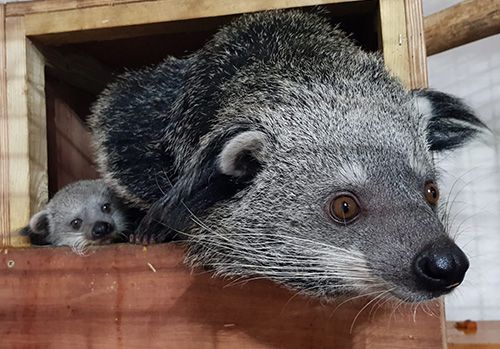 Primate and Small Mammal keeper Estelle was the first person to see the cub. She explains: “I had suspected Himala was pregnant because two weeks before she gave birth, I could feel her stomach protruding and her appetite was through the roof. When I discovered Himala had given birth during the night, I was beyond excited. Coconut is the perfect mixture of both her parents; she is silly and playful, just like Dobby, yet smart and obsessed with food, just like Himala. She is the first ever Binturong cub to be born at Cotswold Wildlife Park and I couldn’t be prouder to have been a part of it”.

Binturongs (Arctictis binturong), also known as Bearcats, originate from the rainforests of south-east Asia. They are neither Bears nor Cats. They are actually related to small forest predators like Fossas, Civets and Genets. They are also the only creature to emit a completely unique scent which smells like buttered popcorn.

Wild populations are becoming increasingly rare and they are listed as vulnerable on the International Union of Nature’s (IUCN) Red List of Threatened Species.  Their population in the wild has declined by 30% in the last 18 years. Explaining why this species needs protection, Estelle (pictured above with Dobby) said: “World Binturong Day is very important because it allows keepers to raise awareness and vital funds for an animal that many people have never heard of. The Binturong plays a very important role in its rainforest ecosystem; it has the ability to aid the regeneration of the forest. It does this by swallowing the seeds from fruits whole and then spreading them across the forest in their faecal matter. Seeds germinate faster after travelling through the Binturong’s gut. Unfortunately, the Binturong is listed as a vulnerable species and its population is declining in the wild. The main threats include deforestation to make way for palm oil, rubber and teak plantations and the wildlife trade, as they can be sold as a pet or used for their fur and meat”.

Cotswold Wildlife Park supports the Bearcat Study Programme which aims to improve the knowledge of this species in its native habitat and collect field data to assist with its IUCN status – more information about the project can be found here.