Cotswold Wildlife Park is proud to announce the winners of its 2018 Photography Competition. Visitors were invited to photograph any creature, great or small, from the collection of over one thousand mammals, birds, reptiles and invertebrates from all over the world. It is one of the largest and most diverse collections in the UK. Now in its sixth year, the competition included a new photographic category – Glorious Gardens. Entrants were encouraged to photograph not only the fauna but also the flora planted within 160 acres of beautiful parkland (including the year-round floral displays in the Walled Garden, exotic planting and picturesque gardens). 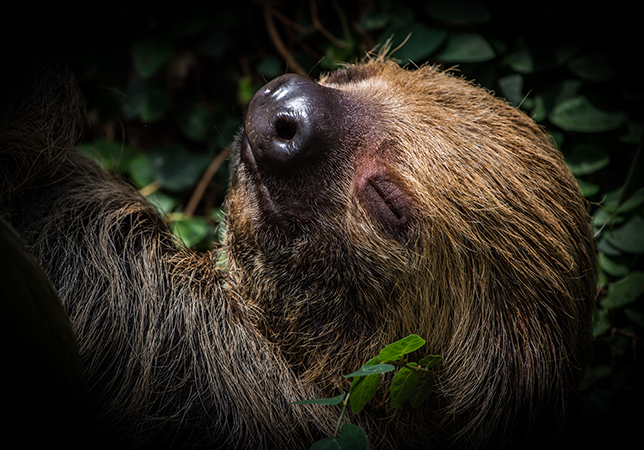 Beating nearly one thousand other entries, Stephen Coles won the overall competition in the adult category with his photo of the Park’s male Sloth blissfully asleep in the canopy of the Tropical House (pictured above). Not only did he capture the laid-back personality of Tambopata perfectly, he also managed to take a detailed portrait of one of the Park’s most reclusive species. Stephen explains: “We love seeing all the animals at the Park and have hundreds of great photos we’ve taken over the years, but there is always something special in capturing those more elusive creatures on camera. We happen to know most of the Sloth’s hiding spots, however, there are still times we have trouble finding them and even when we do, it is usually just an arm or clump of fur on show”. Stephen added: “I took this photo on one of the first sunny days of spring. On this occasion, we were very lucky that Tambopata was clearly visible and seemed to be enjoying the sunshine just below the glass roof. The light was even shining on his nose. Despite being on-show, he was high in the branches on the back wall of the Tropical House, so getting the perfect shot was not straightforward. It wasn’t until I reviewed the image back at home that I knew I had captured it exactly as I had wanted. It has been one of my favourite images ever since – I even still have it as the background on my computer at work!”

Section Head of Primates and Small Mammals, Chris Kibbey, commented: “The photograph perfectly shows off the Sloth’s best skill – sleeping! Sloths will sleep for around 15 hours a day so visitors have been known to spend quite a while looking for him, without realising he is only a few feet away, hidden in the foliage.  Once spotted, it is often just a ball of golden hair on show although lucky visitors have seen him either coming down to feed towards the end of the day or climbing along the branches at the top of the exhibit”.

Two Linne’s Two-toed Sloths free range through the Park’s Tropical House. These extraordinary animals come from the jungle canopy of South America and their upside-down lifestyle is reflected in the reversal of some of their internal organs. 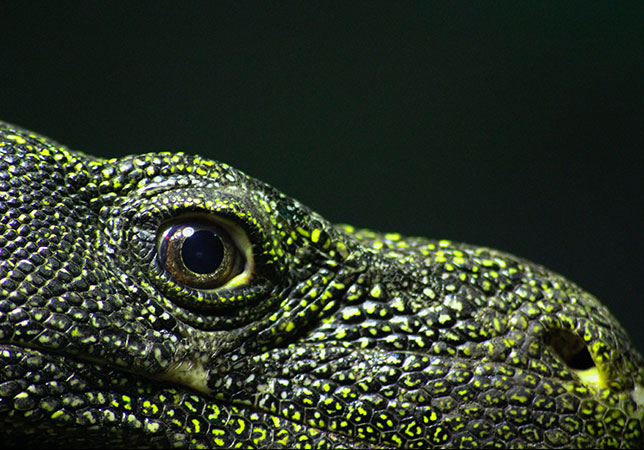 The competition encourages young people to connect with nature through photography and includes a specific category for entrants aged sixteen and under. Reuben Eves won first place in this category with his photograph entitled ‘The Ancient One’ (pictured above). Reuben impressed the judges with his unusual composition featuring the Crocodile Monitor Lizard – the world’s longest Monitor Lizard species. Fourteen-year-old Reuben explained: “It was nearing the end of my trip when I took the photo of the Crocodile Monitor. When I first saw it, I immediately thought it was a very photogenic animal and that it would make an interesting image subject. The Monitor was lying underneath its heat lamp that shone down on it like a spotlight. The backdrop was dark whereas the foreground was bright, which I liked. However, on its own, it was not enough to create the contrast and shadowy effect that creates that pitch-black background in the image. I decided to amplify the effect of the heat lamp by setting up my camera specifically for the picture. This allowed me to get the Monitor’s scales in detail, while drawing the viewer’s eye to the creature, as there was no backdrop. I’m so glad I was able to photograph this incredible reptile. It was both a challenge and a joy to work with”. 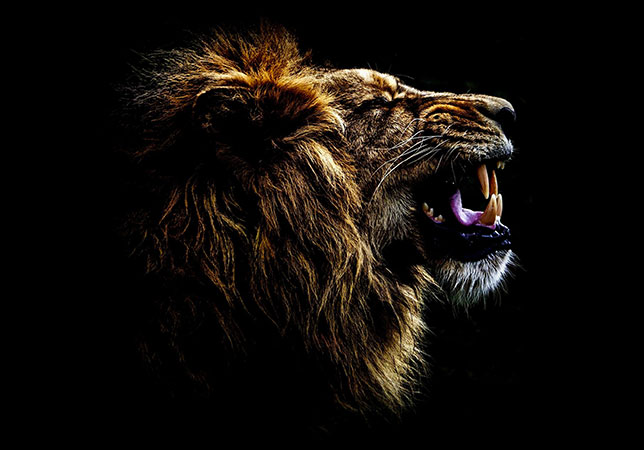 Focusing on your favourite animal was the key behind runner-up Linda McPherson’s success in the competition. Two of Linda’s photographs (pictured above and below) caught the judges’ attention in the Marvellous Mammals category – possibly thanks to her special bond with her favourite creature in the collection – male Asiatic Lion Rana. Linda explains: “I am a regular visitor to Cotswold Wildlife Park and spend a lot of time at the viewing windows photographing Rana and his partner Khana. Every time he sees me, he comes up to the window. He is my favourite Lion in the UK and has a special place in my heart. I have lost count of how many images I have of him and spend hours with him, snapping away. I just love the way Rana sits and looks at you”. Describing her winning shots, Linda said: “I waited two hours for the photograph where Rana was roaring. He roars around 12 noon every day. I knew I had taken the perfect shot as soon as he began roaring. The other photo was taken when he was yawning. His daughters must have tired him out!” 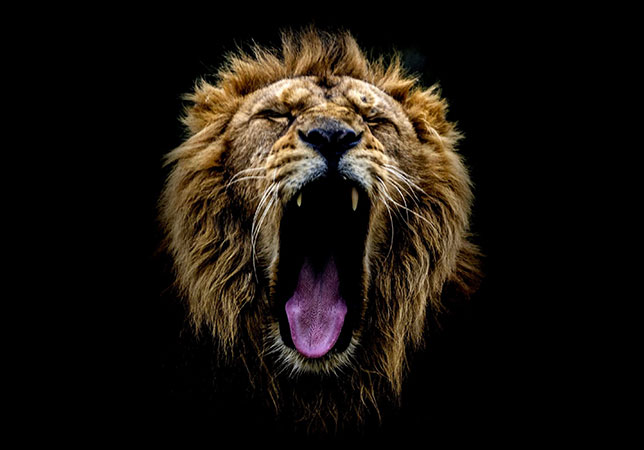 Rana and Khana produced their first litter in 2016 – three females named Kali, Sita and Sonika. They were the first Lion triplets born in the Park’s history.

Love was clearly in the air this year as a record number of affectionate photos were submitted for the competition. These included kissing Otters (taken by David Greig), Lemurs cuddling (taken by Victoria Bowers) and a beautifully tender moment caught on camera between Rhino calf Alan and his mother Ruby (pictured below). The photo (taken by Helen Pinchin) features Alan gently resting his head on Ruby’s horn, an image which not only shows the close bond between mother and son, but also the fragility of these iconic mammals which are killed for their horn at an alarming rate in the wild. Female Rhinos use their horns for defence and to steer their young and guide them until they are capable of navigating on their own. 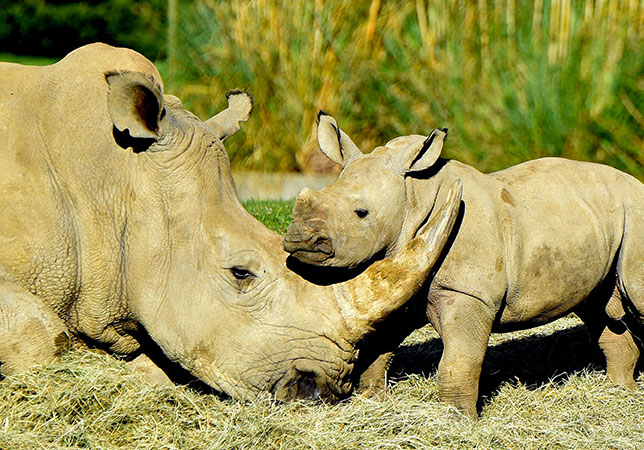 Rhino poaching remains one of the biggest conservation issues in our lifetime. Throughout August each year, the Park hosts Rhino Month to raise awareness and funds for Rhino conservation work in Africa. Cotswold Wildlife Park has raised over £120,000 for conservation in Africa in the last ten years through various fundraising events. In addition, in 2017 the Park sponsored Tusk Trust’s evocative “Not For Sale” Concept Garden at the RHS Hampton Court Flower Show. The garden highlighted the brutal poaching trade and was awarded silver by the judges. Cotswold Wildlife Park works closely with Tusk Trust to promote vital conservation work. Find out more at www.tusk.org and https://www.cotswoldwildlifepark.co.uk/conservation.

Winners of the adult and child categories win a season ticket to Cotswold Wildlife Park & Gardens. The winners’ photographs are on display in the Park’s restaurant.