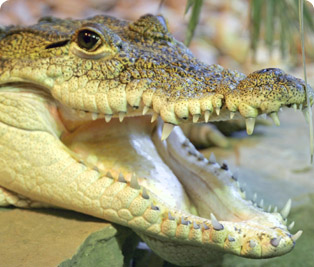 AGE
Up to 65 years in the wild and 80 years in captivity.

HABITAT & DISTRIBUTION
Freshwater lakes, rivers, swamps and ponds around the eastern coast of Mexico, throughout Belize and northern Guatemala.

WHAT THEY EAT
Small fish, reptiles, birds and mammals. When food is scarce they have been known to cannibalise new-born crocodiles and larger individuals will attack humans.

They breed once a year during the rainy season, with females preferring to mate with the dominant male. Eggs are incubated for 2-3 months in mound nests.